VISTA LAND & Lifescapes, Inc. aims to expand its presence in 100 cities and municipalities “in the next two to three years,” the company’s founder said yesterday.

“We will be very aggressive. We are very bullish,” Chairman Manuel B. Villar, Jr. told reporters on the sidelines of a signing ceremony marking his firm’s partnership with consumer giant Procter & Gamble (P&G) in Makati City.

“We are going to build more Camella Homes in the province, especially in second-tier cities.”
P&G tapped Vista Land to deepen its market reach by giving free products to new home buyers and discounts to existing homeowners.

The partnership will run for a year and will be renewable thereafer, Jojo P. Geslani, brand manager of P&G, said in a briefing, adding that his company also expects to gain better insight into specific consumer segments with this initiative.

“We are in about 65 cities and municipalities. We want to increase that, we want to reach around 100 in the next two to three years,” Mr. Villar said.

The former senator said the company plans to expand in locations where Vista Land has no existing presence yet, such as in Bukidnon, Zamboanga, Samar, Nueva Vizcaya, and Zambales. The expansion will remain aggressive in provinces were Vista Land already has existing projects, such as Pampanga and Bulacan, Mr. Villar said.

He also said the company was now doing land banking for the Camella Homes expansion.

“We have existing land banks in those areas, while acquisition and partnerships are in the works,” he said.
Vista Land recorded a net income of P3.79 billion as of end-September, up 16.98% from P3.24 billion in the same nine months last year. In the same comparative periods, revenues jumped 20.51% to P15.92 billion from P13.21 billion, while the cost of sales increased by 22.35% P11.99 billion from P9.8 billion.

Reservation sales rose 18% to P35.5 billion from P30.1 billion as the company launched 27 projects worth a total of P19.4 billion in the same nine-month periods.

For this year, the company has projected P20 billion in revenues and P5 billion for its bottom line.

These projections were higher than the P17.40-billion revenues and P4.37-billion net income actually realized last year.

The company had planned to spend P18.6 billion this year, with nearly P10 billion to start new projects and the rest for land acquisition.

Read the full article on https://www.bworldonline.com/content.php?section=Property&title=Villar-developer-plots-further-expansion&id=80344. 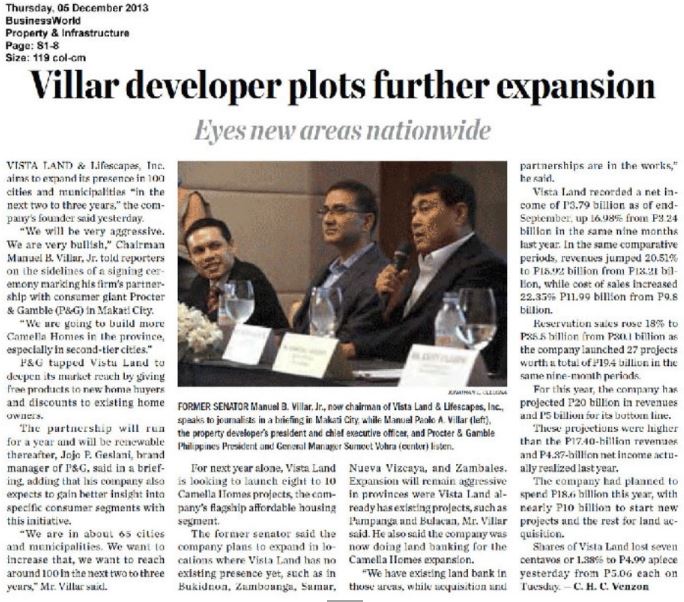