Crown Asia Properties, Inc., a subsidiary of Vistaland and Lifescapes that caters to the upper-mid market segment, recently made history as it broke ground for 3 of its newest offerings in 3 different locations last July 26, 2016. This Event was aptly called “Ignite: Bigger, Better, Bolder Crown Asia” and was attended by Crown Asia Officers and Staff, as well as their Dedicated Sales Partners.

“This symbolizes our commitment to provide Bigger, Better, and Bolder Products to suit the needs of our market.” Ms. Leni Luya, Chief Operating Officer, said during the event.

Ignite jumpstarted in Ponticelli Gardens located in Daang Hari in Bacoor, Cavite wherein guests witnessed the ceremonial groundbreaking of the community’s four (4) Designer Series’ units. The units that will be built in this property are the Designer 97, Designer 110, Designer 142, and Designer 166. These units will serve as viewing units for buyers who want to appreciate the new house models.

“The designer series was launched last April 2016, and it has been widely accepted by the market since then.” Stated Joshua Cabungan, Head of Sales & Marketing. “In fact, almost 50% of our sales for the 2 quarters comes from our Designer Series.” The event continued at Citta Italia in Bacoor, Cavite. Here, guests came to appreciate the actual location of Brescia Upper Lane Executive Villas. Guests left their handprint as a ceremonial gesture for this new development in the area.

“Leaving this handprint symbolizes the combined effort of everyone in being able to build the Brescia Upper Lane.” Said Anna Lucas, Head of Corporate
Communications. Guests then head on over to Valenza in Sta. Rosa, Laguna. New Designer Series Units will also be built here as model units so buyers will be able to appreciate these new homes. The house models to be constructed here are Designer 97, Designer 110, Designer 142, and Designer 166. Crown Asia Officers did ceremonial bricklaying at the location of the model units.

“We’re making it easier for our market to appreciate our new homes.” Emphasized Mr. Cabungan. “We built the Designer Homes both in Ponticelli and Valenza to make these closer to our customers.” Aside from breaking ground for the Designer Series, Guests proceeded to the site of the soon-to-be-launched Valenza Mansions. Valenza Mansions boasts of innovating condo living.

“We are very excited about the new Valenza Mansions. We wanted our partners to have a preview of what’s in store for them here in Valenza.” Said Ms. Lucas. “We broke a wine bottle, similar to a ship’s maiden voyage, to symbolize that this is a whole new way of condo living – a maiden venture for condominiums in Sta. Rosa.”

Ms. Luya aptly concluded the event with a toast as all the guests converged in the Valenza Clubhouse. She saluted the dedicated sales partners and wished them BIGGER OPPORTUNITIES; She commended the technical team for always rising to the challenge of designing BETTER PRODUCTS; She thanked everyone for BOLDER MOVES, finding new ways to serve the market.

“Here’s to all of us! May this event be a symbol that here at Crown Asia, we always aim to give partners and buyers a good life. Today, let’s prepare as bigger, better, and bolder things await.” declared Ms. Luya’s. 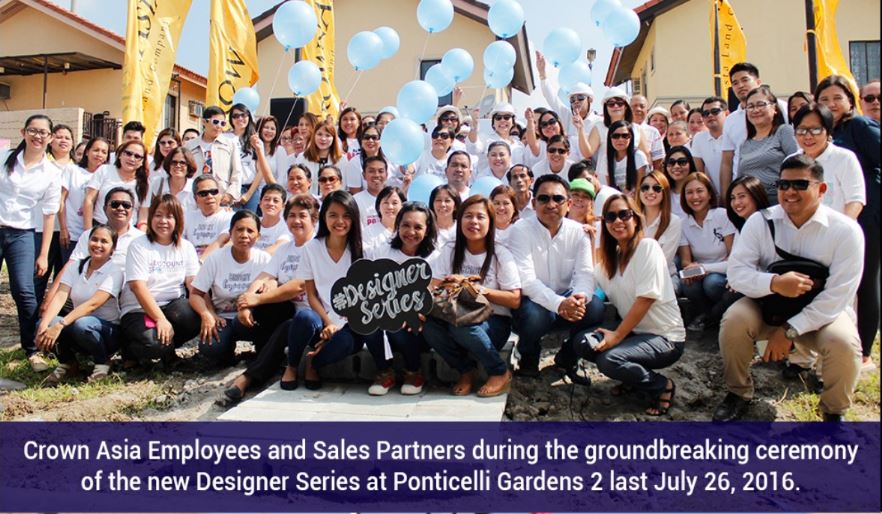