Relax and Watch a Movie Inside Your Home

COVID-19 has undoubtedly changed certain conditions in our life, introduced a new normal in our society and limited everyone on what they want to do. Some are stuck inside, working from their house and lot in Cavite or Laguna while some are, sadly, risking their health and safety going to and from work because of the nature of their occupation. Whatever your situation may be, it is imperative to have a few breaks there and then to keep our minds healthy. Too much stress, too much work and, in general, too much of everything is harmful to your mind and body. There must be a fine balance between everything. To balance things out, why not spend some time in your home, relax and watch a movie by yourself or with your loved ones. Movie theaters are still closed due to the pandemic and we need to stay at home. What a better way to kill some time than to watch a movie inside your home or condo unit.  Some of Crown Asia’s house and lots for sale in Laguna or Cavite are planned with a separate room for media entertainment, fit for any film enthusiasts.

Movies have different genres and styles - others might scare you in the cinema while others might give you a laugh. Other movies have bad stories, but they come with good cinematography. And in the end, a movie, much like any art form is subjective to your own liking. Crown Asia prepared a list of 8 movies for you to watch inside you home, may it be a house and lot for sale in Laguna or a house and lot for sale in Cavite. Although one or two movies on this list might not make you feel happy in the end, the technique, and the story itself might rather make you feel inspired. And to some, watching a movie just makes them feel happy and refreshed because they just simply love watching movies. Please note that some of the movies here are not found on Netflix.

8 of the Best Movies You Can Watch in the Comforts of your Home: Quill is a Japanese drama film released in 2004. A fictionalized story, the film is adapted from the novel “The Life of Quill, the Seeing-Eye Dog” which was based on a true story.

The movie centers around the life of Quill, a seeing-eye guide dog, starting from his puppyhood up to his old age. After years of training, he later gets paired with a blind man who is reluctant to accept any of Quill’s help. The film goes on with their story and what happens afterwards. Unlike some films about dogs, the movie does not use any special effects or any shots to highlight cuteness, instead it focuses on Quill itself, his personality, and the people that he meets throughout his life. Quill is a family friendly film fit for you to enjoy with your kids, loved ones and even your pet inside a Crown Asia home. Shawshank Redemption is an American Drama film released in 1994. The film was adapted from the Stephen King novella “Rita Hayworth and the Shawshank Redemption”. It was nominated for seven Academy Awards in 1995 and two nominations for Golden Globe awards, however it did not win any. Although the name might suggest other meanings (one of the reasons why it did not do well on its release), the story is worth the watch and is considered one of the best films ever made. It has the highest rating ever on the website IMDb with a rating of 9.3.

The movie is about Andy Dufresne, a successful banker, who finds himself convicted for two consecutive life sentences at the Shawshank Prison for the murder of his wife and her lover despite claims of innocence. At the Shawshank Prison, he befriends Red, a fellow inmate and contraband smuggler who will later become his best friend. Due to his background in finance, Andy begins assisting the warden and the prison guards with their financial issues which results in him being liked and protected by the guards. Later, Andy gets involved in a money laundering operation led by the warden, contrary to his integrity.

Along the 19-year story, viewers are shown how Andy experiences the brutality of prison life, how he adapts to it and their “redemption” through their acts. The film gives a good illustration of hope, of freedom in limited spaces or feeling unfree in the freedom of life, which is quite the opposite in Crown Asia’s House and Lot for sale in the wide open spaces of Cavite or Laguna. The film is also available on Netflix. Amelie, originally known as Le Fabuleux Destin d'Amélie Poulain (The Fabulous Destiny of Amelie Poulain in English) is a French-German romantic comedy film that was released in 2001. It won numerous awards including Best Film in the European Movie Awards and was nominated for five Academy Awards. It is one of the biggest international successes for a French film.

The movie is about Amelie Poulain, a shy and innocent waitress in a Café in Montmarte, Paris. She grew up lonely mainly due to her parents deciding to home-school her. As a result, she develops an active imagination. After hearing the news about the death of Princess Diana, a chain of events happens which leads her on a life mission where she intends to help random people in her own way - through discreet out of the box strategies in accord to her own amusement. Along the way, she finds love. The film is a whimsical depiction of Parisian life which feels like a fairy tale at times. The eccentricity and idiosyncrasies of the characters are very much highlighted throughout the film which gives it a unique charm. 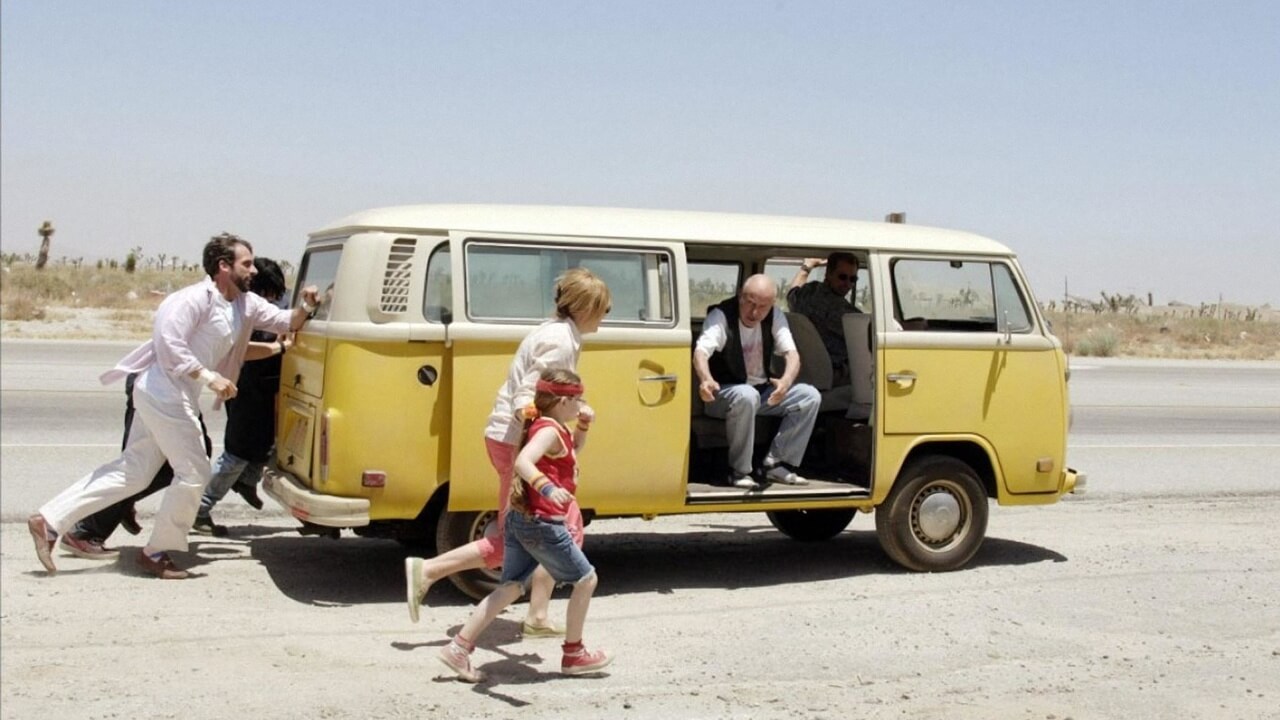 Little Miss Sunshine is an American tragicomedy/road film that was released in 2006. With a budget of only $8 million, it was a box office success with the movie earning $101 million. It got numerous accolades including 4 Academy Awards nominations, winning two: Best Original Screenplay and Best Supporting Actor.

The movie is about The Hoover family. The father, Richard, wants to be a life coach/motivational speaker and tries to sell his success program but to no avail. The mom, Sheryl, acts as the pillar and main supporter to their family, including his depressed brother, Frank, who is fresh out of the hospital; 7-year-old Olive who wants to be a beauty queen and Nietzsche-reading Dwayne who is on a vow of silence. The grandfather, Edwin, who recently got evicted from his retirement home, tops off the family. From New Mexico, they go on an 800-mile road trip to California in a VW bus to support Olive’s bid to win the Little Miss Sunshine pageant.

Along the way various things happen to the family, the audience gets to know more about each character’s personality and the sanity of the family is stretched to the limit. Moriyamachu Driving School is a Japanese Drama/Comedy that was released in 2016. A live action adaptation of the Manga series “Moriyamachu Kyoshujo”, it can also be classified as a coming-of-age film.

The movie tells of a story of an unlikely friendship between two boys named Kiyotaka and Todoroki. They met during one summer in an accident where Todoroki, a driver/assistant to a yakuza boss, hit Kiyotaka while riding his bike, rendering him unconscious. This now presented a predicament as Todoroki is an unlicensed driver. Fortunately, Kiyotaka recovers with no injuries. Later, they are both taken to an unauthorized driving school where Todoroki and Kiyotaka, whose dream is to get his license and move away from their small town, will take driving lessons for free, care of the yakuza boss.

The story goes deeper on their friendship, the growth of each character, their future, their struggles, and their time at the driving school. Although they are opposites, they expand an unlikely relationship they thought could never get more meaningful. Pinoy Sunday, contrary to its name and the actors in the movie, is a Taiwanese comedy/drama film released in 2009. Technically a Taiwanese movie, the dialogue of the film is purely in Filipino. The film was inspired from a 1958 Roman Polanski short film.

The movie begins with two overseas Filipino workers in Taiwan, Manuel and Dado with their personal life and living conditions abroad being highlighted on the outset. One day while eating, they see a couple who have a brand-new sofa being moved into their home. The couple ended up fighting and abandoned the brand-new sofa. The story then follows Manuel and Dado’s accident-filled journey at bringing the sofa back to their home.

A fun and lighthearted movie, the film also talks about their perseverance and self-discovery. The film is available on Netflix. The Wind Rises is a Japanese animated historical drama film released in 2013. Animated by Studio Ghibli, the film is a fictionalized biographical film of Jori Horikoshi, designer of airplanes. The movie was nominated for several awards including the Golden Globes and the Academy Awards.

The Wind Rises is about Jori’s love for aircraft. As a child, he dreamed of being a pilot and building beautiful airplanes, however due to his nearsightedness, he is unable to fly airplanes. Inspired by famous Italian aircraft designer, Caproni, he later dreams about him telling him that it is better to build planes rather than flying them. The story later chronicles Jiro’s path to becoming an airplane designer for Mitsubishi and several historical events during and before World War II that affected him and the whole country and his journey at finding love.

An animated film mainly intended for younger audiences, The Wind Rises also shows a beautiful story about a man’s love for airplanes that is even fit for adults to watch. Unlike his previous films like My Neighbor Totoro, Spirited Away, Princess Mononoke, Howl’s Moving Castle, etc., The Wind Rises is a more grounded film with less fantastic themes. Controversy arose when Hayao Miyazaki made a film that “romanticized” war, but that is because the film is mainly a sympathetic biography of a man who built a remarkable piece of machinery that was later used by other people in a bad way. Not focusing about war itself, The Wind Rises is a perfect film for you and your family to watch inside your Crown Asia house and lot. Two Distant Strangers is an American science fiction/drama short film that was released in 2020. The film won Best Live Action Short Film at the Academy Awards. Sean Combs also known as P. Diddy, NBA MVP Kevin Durant and All-Star Mike Conley Jr. along with others were producers of the film.

The movie is about Carter who is stuck on a time-loop. He wakes up the morning after the first date and is just trying to get back home to his dog. On his way home, he gets searched and is then killed by a cop. He is forced to relive the same day repeatedly with him trying to change things everyday hoping to not get killed again.

The movie is only 40 minutes long and is found on Netflix, perfect to watch on any smart tv inside your Crown Asia home. Contrary to the other films mentioned on this list, Two Distant Strangers might not give the same vibe. Nonetheless, it is still a good movie with a good story and good message. Watching a Movie on the Comforts of your Crown Asia Home

In the times that we live in, we need to have something that would make us feel at ease notably now when we are mainly cooped up inside our homes. May it be alone or with your family, watching a movie is a good way of relaxing especially inside your Crown Asia house and lot in Cavite or Laguna.