Just like your first bought preselling house and lot, firsts are historic. And just recently, Filipinos have been starting to gain attention from all over the world because of their recent “firsts” from different disciplines. 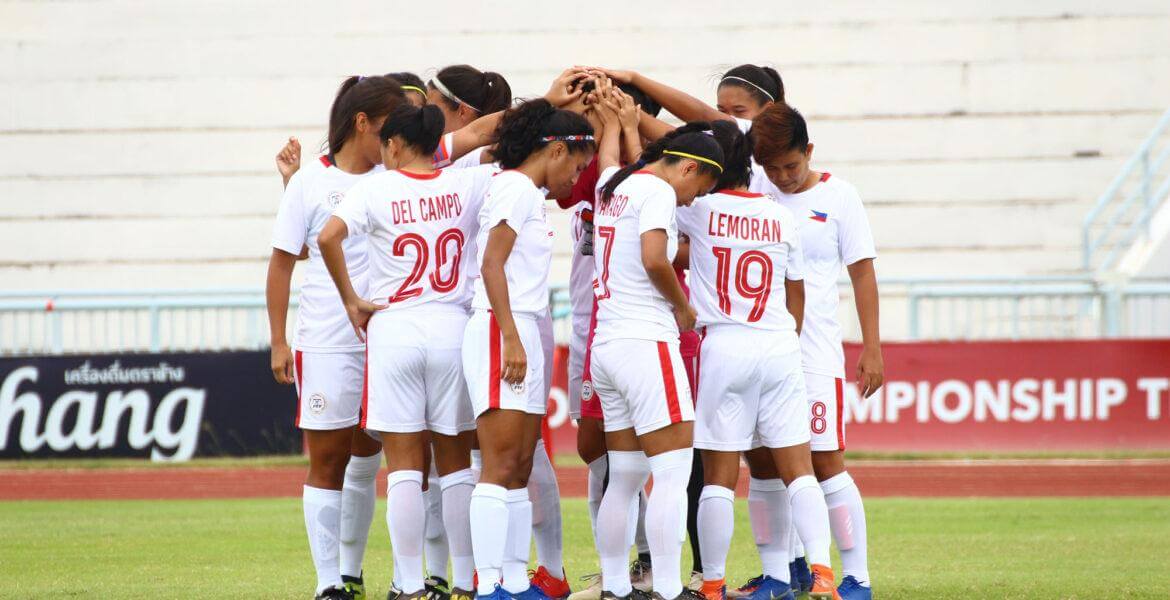 It may not be known to a lot of people, but the football women’s national team of the Philippines has been around for a while now. It was formerly called the Philippine Ladies Football Association (PLFA) and it was established in 1980 by former international footballer, Cristina Martinez Ramos-Jalasco, who was also the first female president of the Philippine Olympic Committee.

In the 1985 Thailand SEA Games, the Philippines was able to compete in the first-ever Southeast Asian Games that hosted women’s football. Unfortunately, the country got third place in a three-team competition and we didn’t win a single match. So, you can say that we’re off to a rocky start.

Fast forward to the 2010s, the team started a training camp in the United States in 2012 to scout for players that have Filipino heritage to join the national team. In the same training camp, the national team played in the 2012 LA Viking Cup where they won against California Cosmos, Metro Stars, and Leon.

Since then, the national team has had its fair share of coaches. From Marlon Maro between 2001 to 2007, Joel Villarino in 2008 to 2009, Ernest Nierras in 2011 to 2013, Buda Bautista in 2015 to 2017, Richard Boon from 2017 to 2018, and so on. There have even been instances where they had more than two coach changes in a single year. While we may not know for certain the reason behind this, we can thank the current coach, Alen Stajcic for our FIFA qualification.

Now, just in case you’re a football fan who wants to show your partner your passion aside from providing them with a preselling house and lot, let’s talk about why the World Cup is such a big deal.

Why the World Cup Is Such a Big Deal

Since the first competition for the cup in 1930 by the Fédération Internationale de Football Association (FIFA), it has grown to become the most popular and most-watched sporting event in the world. But it begs the question, “why football (or soccer)?” 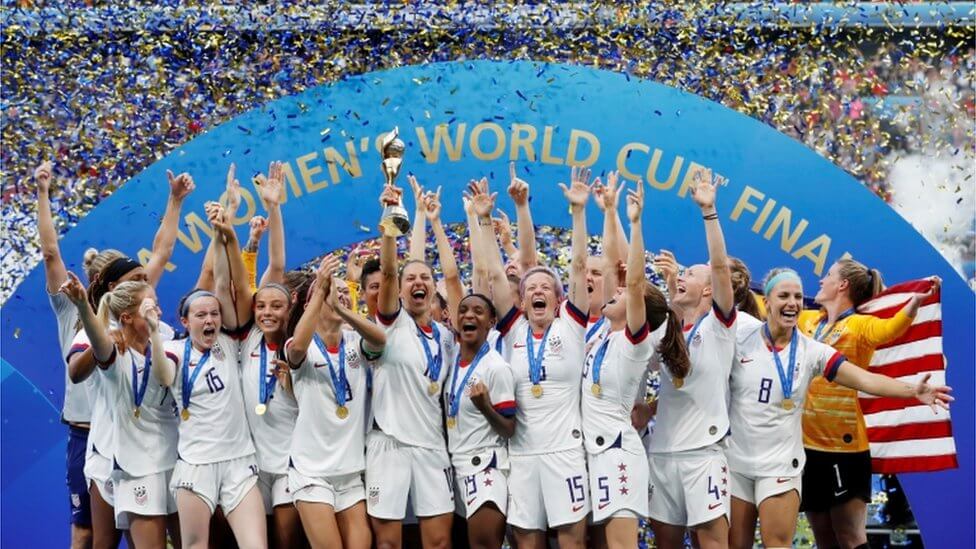 One quick answer could be because the World Cup is the only real global sports event. This makes the event the ultimate cultural expression since any country can participate in the event, without the restrictions of the Olympics.

See, unlike Olympic football, the World Cup doesn’t limit its players to a certain age or amateur status. Hence, the competition is an actual, real contest between the best football players in the world. Plus, no other sport embraces so many people of different cultures and races from every corner of the earth.

For some countries like the African nations (who, by the way, probably plays harder than anyone), the World Cup is their way to shine and, more importantly, to be able to help their family back home. Moreover, the World Cup is a competition where few new stars are created since it only happens every four years to make time for qualification tournaments and playoffs. Hence, winning the cup means more history for the country that wins.

Although aside from its vast cultural representation, the World Cup is also popular simply because football or soccer is a simple sport.

Other sports like baseball, rugby, or even the Philippines’ most popular sport, basketball, all have quite a complicated rule book. Basketball, for example, can take over 40 pages of rules and details of where a player should be on the court, a list of violations, time limits, and so much more. On top of that, rules are different for some countries like the United States and even during international competitions.

On the other hand, football or soccer only has 17 laws. This already includes how many players can play in a match, fouls, and misconduct, determining the outcome of a match, and even the different types of kicks. The rules are so simple that the game can be played by a five-year-old with a little coaching. If a five-year-old child plays a basketball game, you can expect that there are more violations than points.

If you have kids and you want them to learn football while you look for a preselling house and lot, you can check out this link for the football academy of Manila Football. 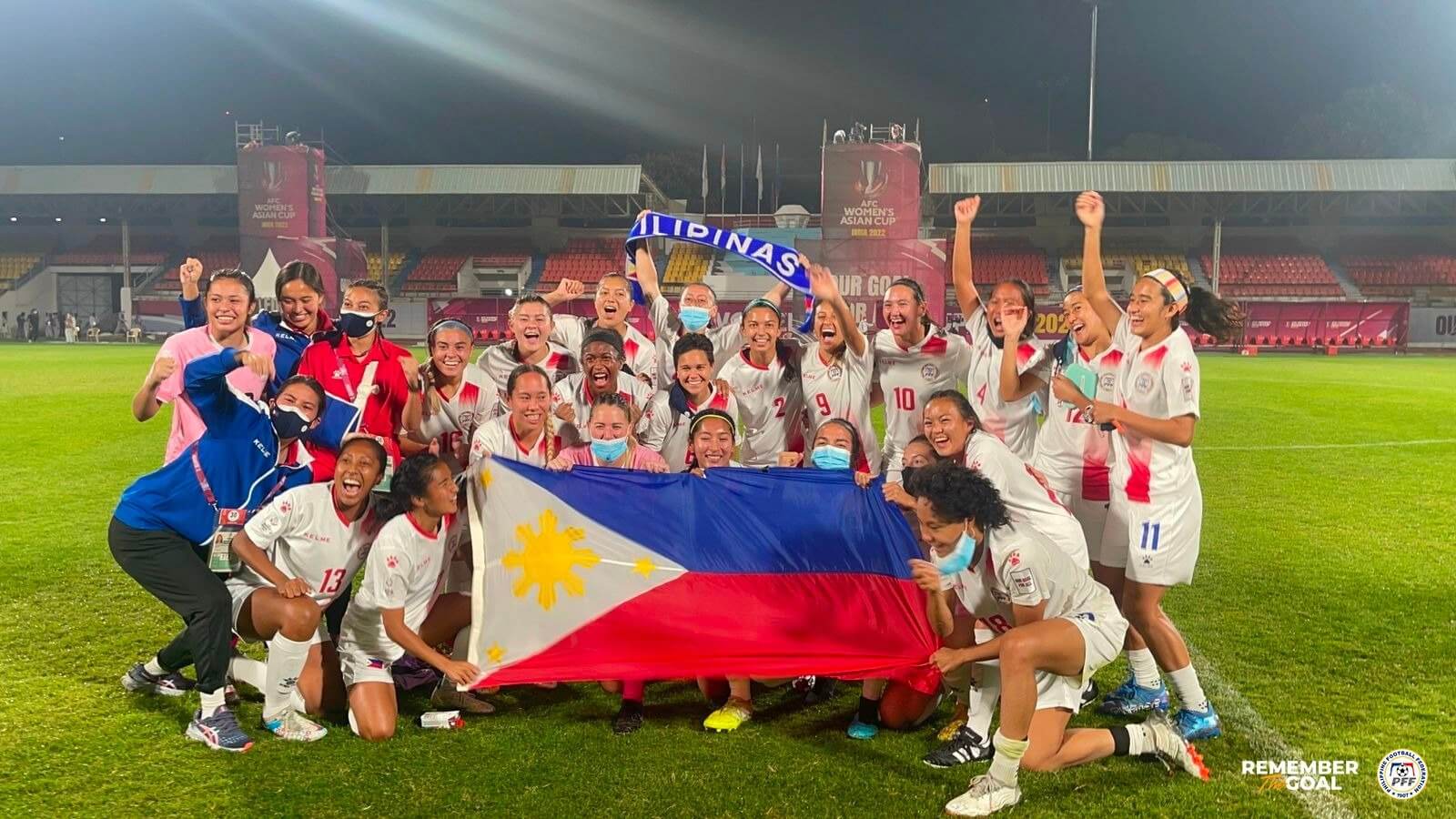 Since the World Cup is a truly global event, you could guess why it’s so important and equally difficult to at least qualify for the event. Qualifying for the World Cup means competing and winning against other nations in your continent.

Our national team has tried to compete in the AFC Women’s Asian Cup a lot of times since 1981.

Much like how buying your first preselling house and lot is historic for you, this year also marked a historic event in our country’s football history.

After qualifying for the 2022 Women's Asian Cup last September 2021, they were set to complete in the group stage (Group B with Australia, Thailand, and Indonesia). Our team started the group stage with a match against Thailand, where we got a 1-0 win. This may sound so close, but this is actually a huge deal because this was our country’s first win against Thailand in twelve matches.

After Thailand, we lost to Australia in a devastating 0-4 match. This may seem discouraging, but our national team soldiered on and won the match against Indonesia in a 6-0 landslide, which advanced them to the knockout stage quarterfinals.

In the knockout stage quarterfinals, our national team was set to compete against Taiwan (Chinese Taipei). The match ended in a tense 1-1 draw, so they had to compete in a nerve-wracking penalty shoot-out to know which team would advance to the semifinals. After an even more nail-biting match, our team won the penalties (3-4). This very win secured our spot in the 2023 FIFA Women's World Cup.

Our team’s historic win wouldn’t have been won if our players weren’t worked exceptionally hard by their coach, Alen Stajcic. 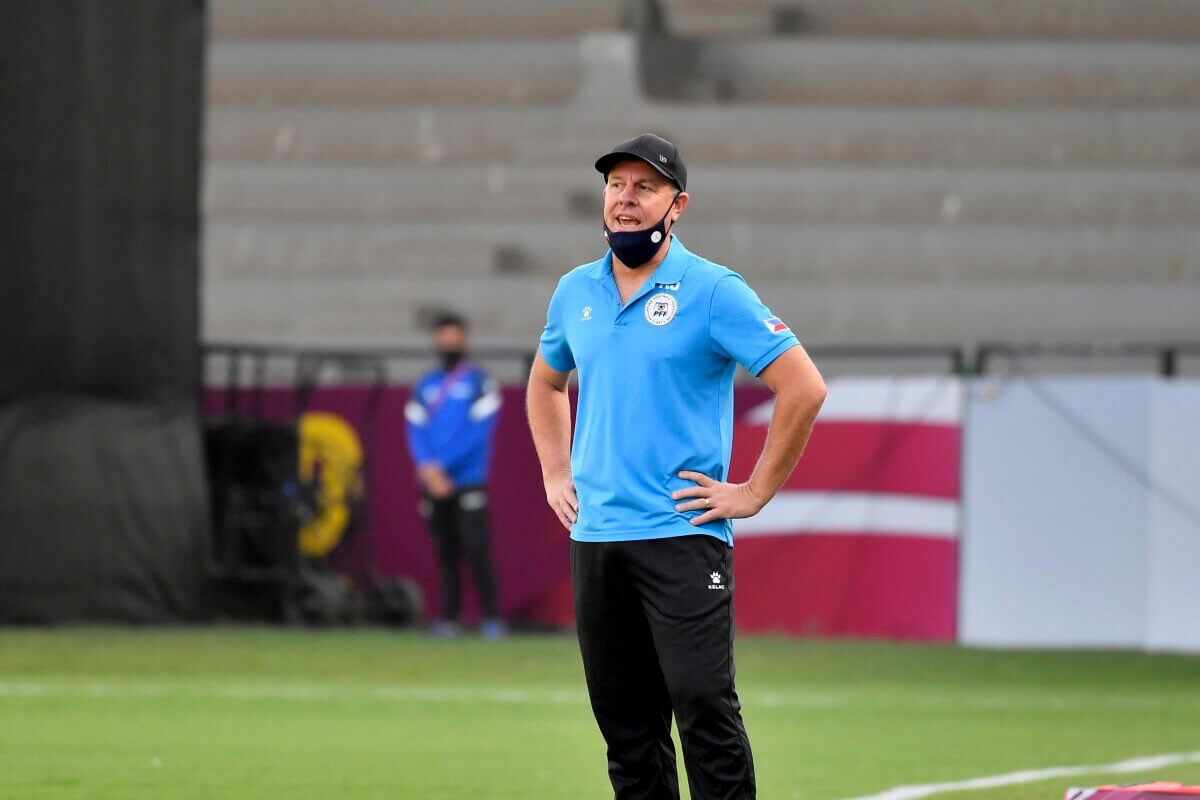 Just like most football coaches, Alen is a former football player from Australia where he played in the NSW Premier League and was also an Australian Youth Representative.

He started his coaching career in 2002, where he became the head coach of NSWIS Women’s Football Program, one of the best football nurseries in Australia. He was also the head coach of the top soccer league of Australia, the Women’s National Soccer League.

One of his most historic moments as a coach was when the Matildas, the national women’s team of Australia, became the first Senior Australian Football Team to win a knockout match in a World Cup in 2015. This also gave him the pride of becoming the only Australian-born coach to win a match at a FIFA World Cup.

Unfortunately, Alen got sacked from his position by the Football Federation Australia (FFA), even when he got the team to qualify for the 2019 Women's World Cup. The reason behind it was unclear, but the facts were claimed to be legally confidential. He then sued the and won the case with a six-figure settlement for losses and reputation damage.

Despite that, Alen continued his work as an effective football coach and got appointed as head coach of the Malditas (the national football team of the Philippines, female counterpart of the Azkals) in October 2021.

After winning the penalty shootout against Chinese Taipei and securing the first-ever spot of the Philippines for the 2023 FIFA Women’s World Cup, this achievement became Alen’s third FIFA World Cup qualification where he was the coach.

Now, this qualification and him, being the coach, is such a big deal because our national team ranked 68th in the world, and was still finding its footing on the global stage before he came.

According to an interview with FNR Football Nation Radio, Alen was called by his close friend, Jimmy Fraser, who put him in touch with all the leaders from the Philippines Football Association. After meeting them, Alen said he was really impressed by their ambition and aspiration, which was what he was looking for.

He said that he wants to work with a country that wants to get behind its team and achieve history. The job was undoubtedly difficult, however, because our team did have a lot of experience in major tournaments. What moved him was the passion and pride of the Malditas, whom he considered to probably be the best group he’s even been part of.

A humble coach, Alen Stajcic gives all the credit to the Filipinas he’s been coaching. Moreover, the highlights of the match against Indonesia were from Tahnai Annis and her long-range strikes.

Tahnai Lauren Rivera Annis is the captain and midfielder of the Philippines Women’s National Team, Malditas. She is a native of Zanesville, Ohio, but her mother traces her roots to Lucena City, Quezon Province. 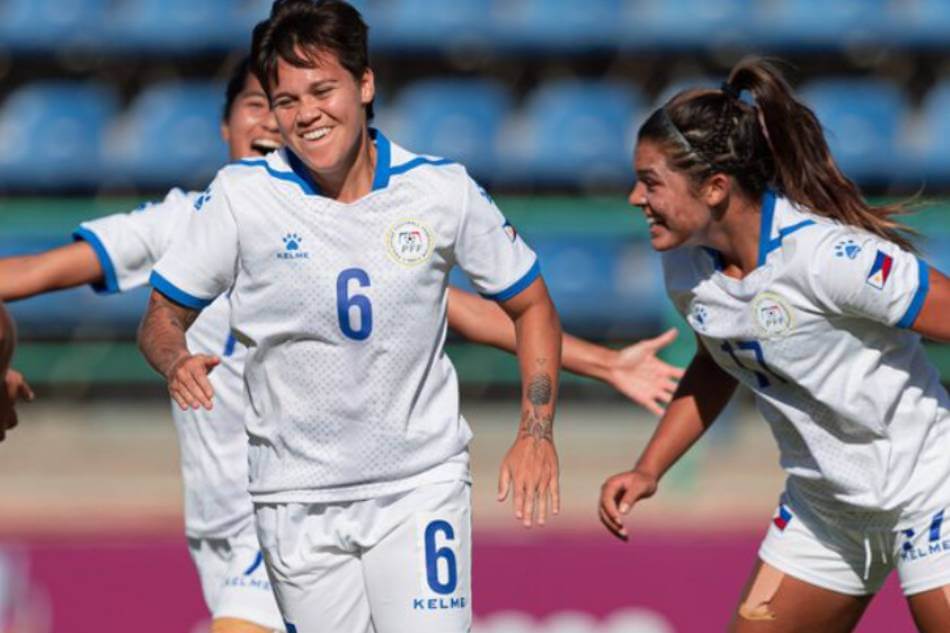 Annis has played for the women’s soccer team of her college at the University of Florida, from 2008 to 2011. After that, she played professionally for the top-flight women’s league in Iceland, the Þór/KA, from 2012 to 2014. With her help, the club won a league title in 2012 and was awarded MVP in 2013.

In 2018, she joined the Philippines Women’s National Football Team during the training camp in the United States. She qualified thanks to her Filipino roots from her mother and was then designated as the captain.

On top of football, Tahnai Annis is a pro ambassador of the Athlete Ally, a group whose mission is to end homophobia and transphobia in sport and to encourage the athletic community to support LGBTQ+ equality. In her profile, Annis says that soccer was where she felt most safe and she believes that it’s time for all athletes to feel safe to live their truth.

Being part of the LGBTQ+ community and being the captain of the women’s national team of the Philippines, Annis is under a lot of pressure to help the country’s team to qualify for the FIFA World Cup.

In an interview from Tiebreaker Times, Annis said that the first half of the Indonesia match was not her best. She said she was trying a bit too much even when she knew what she needed to do. So, in the second half of the match, she took some of the pressure off and just played simple. When opportunities for a shot came, she took it.

According to Annis, they have been blessed to have quality time together in this campaign, which made them a little more cohesive as a unit and as a team. She says it's the closest they’ve ever been before. 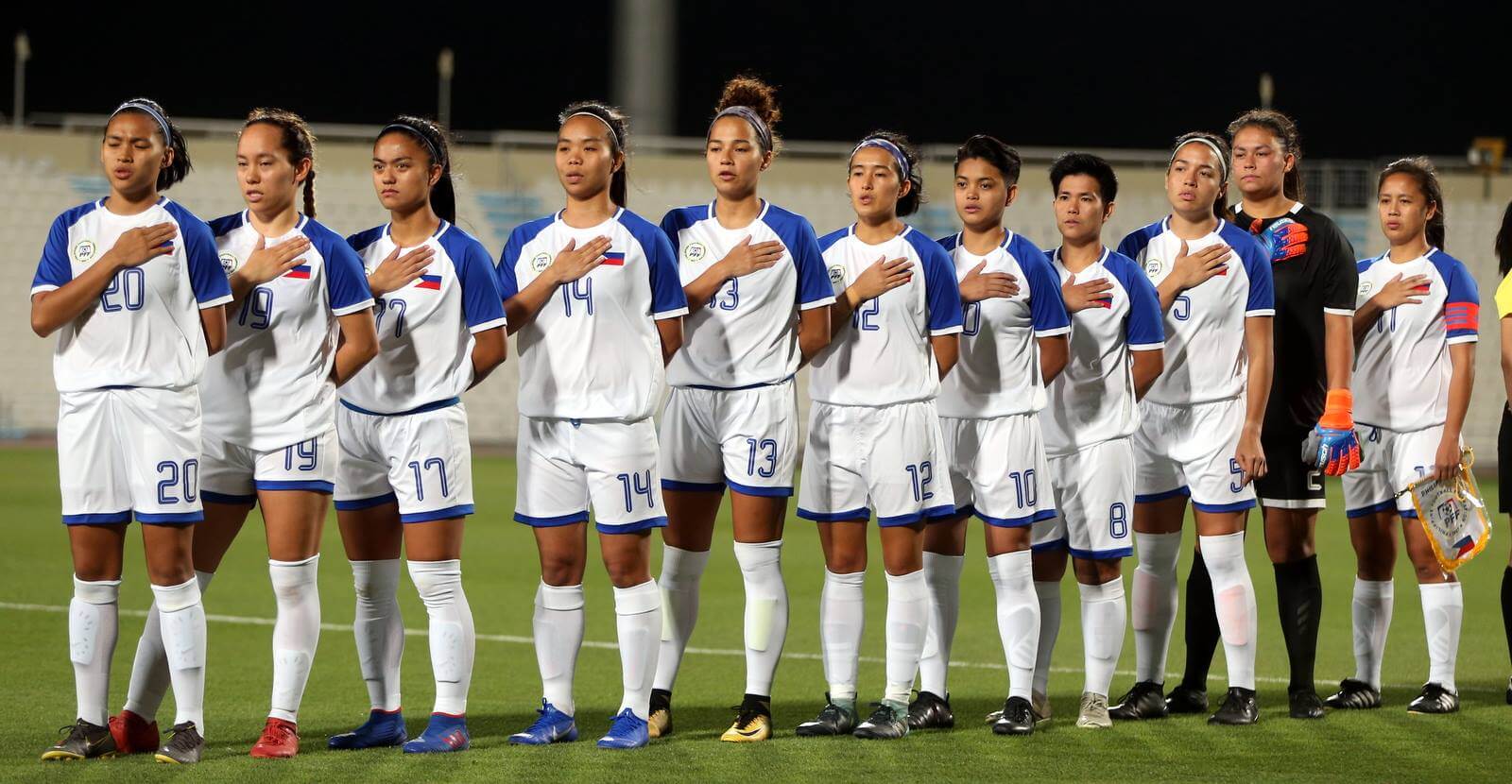 “They’re not full-blooded Filipinos” Does it Matter?

Unfortunately, while our national team has become more united, some people have been doing the opposite by questioning their national identity, saying that they’re not full-blooded Filipinos. This isn’t really new anymore because there have been issues about this since the male counterpart of the Malditas, the Azkals.

In 2012, a certain broadcaster claimed that they were not “true Filipinos” since most of them were children of Filipinos and foreign nationals, and spent their childhood abroad.

However, according to Dr. Michael D. Purugganan, the dean for Science at New York University, the Dorothy Schiff Professor of Genomics, we are all mixes. This is because of the several thousand years of colonization and mixing. So, in a genetic sense, Filipinos are truly global people.

At the end of the day, full-blooded or not, these players are all proudly representing our country. For that, we should be proud of.

Related Blog: Major Football Events to Look Forward to This 2022